The Teamsters are America’s largest, most diverse union. In 1903, the Teamsters started as a merger of the two leading team driver associations. These drivers were the backbone of America’s robust economic growth, but they needed to organize to wrest their fair share from greedy corporations. Today, the Union’s task is exactly the same.

The Teamsters are known as the champion of freight drivers and warehouse workers, but have organized workers in virtually every occupation imaginable, both professional and non-professional, private sector and public sector.

There are nearly 1,900 Teamster affiliates throughout the United States, Canada and Puerto Rico.

Teamsters stand ready to organize workers who want to bargain collectively. Once a contract is negotiated and signed, the Union works to enforce it—holding management’s feet to the fire and invoking contract grievance procedures if management chooses not to. Wages and benefits under Teamster contracts are markedly better than those of non-union employees in similar jobs. Teamster contracts are the guarantors of decent wages, fair promotion, health coverage, job security, paid time-off and retirement income.

The Teamsters Union also performs vital tasks in such areas as pension management, safety & health, community outreach, governmental affairs and communications. For more than a century, the Teamsters have been a public voice for the rights and aspirations of working men and women and a key player in securing them. 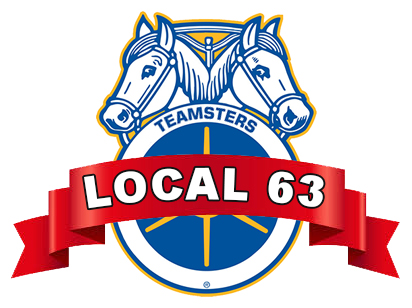 In 1975, the International Brotherhood of Teamsters granted a charter to Local 63.  What began as a 3,000-member, Los Angeles-based Local has now proudly grown to over 16,000 members covering Central California to the Mexican border, and from the Pacific Coast to Arizona and Nevada.

Members work in virtually every Teamster-represented industry in eight divisions: Dairy, Meat, Freight, Grocery, Bakery, Car Haul, UPS and Miscellaneous.  The strength of the Local is derived from the Diversity of these hardworking members.

The incredible growth of Local 63 is the result of years of aggressive organizing, the mergers of other locals, and the goals and visions of passionate leaders.  Their dedicated work has also helped protect jobs through years of an ever-changing economy.

The Local is part of the largest labor union in the free world, the International Brotherhood of Teamsters ("IBT").  With almost one and a half million members, the IBT has bene diligently fighting for good contracts, safe work environments and effective representation for over 100 years.  Like the IBT, Local 63 is rich in history encompassing trusteeships, strikes, the accomplishments of great leaders, job protection, solidarity diversity and progress.

The following Local Unions have merged into Local 63: